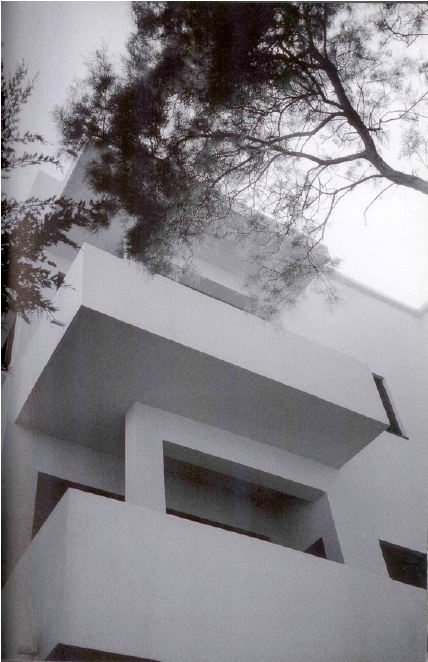 Günther Förg’s artistic practice encompasses the media of painting, sculpture, and architectural photography. From an early stage in his career, Förg established his reputation as a critic of the weighty legacy inherited by European and American modernism. His sharp observations concerning modernist aesthetics have become a marker of the postmodernist moment. Since the 1980s, Förg also began utilising photography in his work, printing large format images of culturally and politically significant architectural structures. These are characterised by their angled perspectives and choice of monumental subjects, ranging from Fascist constructions in Italy to Bauhaus buildings aimed at a new social ideology.

In 2001, Förg arrived in Israel together with his longtime assistant Michael Neff and the director of the Kunstverein ‘Politischer Club Colonia’ in Cologne, Rudolph Grass. The three spent a week between Tel Aviv and Jerusalem, photographing buildings that were designed in the 1930s and 40s largely by architects who had emigrated from Europe to Palestine. During this visit Förg had photographed approximately fifty buildings, some of which he planned to explore in advance of the visit, and some encountered by chance while walking through the cities. Förg was fascinated by the possibility of revisiting these ambitious architectural projects, intended to conform to social, technical, and aesthetic principles postulated by Bauhaus principles in the years after the school’s closure in 1933. Arieh Sharon, Sam Barkai, Genia Averbouch, Ze´ev Haller, Pinchas Hütt, Richard Kauffmann, Erich Mendelsohn were among a group of Jewish architects who then arrived in Palestine seeking to build affordable housing for the present wave of immigration: working-class housing developments, but also villas and artists' studios. More than 1500 of these buildings still lend a distinct character to the city scape of Tel Aviv today, the largest ensemble of this particular style world-wide.

Günther Förg's photographic research was executed with a 35mm Leica camera without a zoom lens. He photographed every building under equal technical conditions and only after the fact some photographs were enlarged and cropped during the printing stage. The photographs represent the uncompromisingly modern architecture as it survived seventy years after its construction in an unembellished way, sometimes newly refurnished, sometimes dilapidated, often featuring careless renovations or additions. Förg’s Tel Aviv appears through the lens of its pioneering architecture but in complete disconnect from the city’s street life; as monuments that have stubbornly defied the course of time, manifesting the social utopias of a different historical moment.

One of Förg’s subjects in his Bauhaus series is the house on Bialik 21, Tel Aviv, which was built by the notable architect Shlomo Gepstein in 1934, and since 2008 houses the collection, offices and exhibition space of the Bauhaus Foundation, Tel Aviv. The exhibition ‘Günther Förg Was Here’ brings Förg’s documentation of this particular building’s exterior into the interior space of the house, where the pictures will occupy the main exhibition gallery alongside selected paintings from the 1990s that manifest the artist's interest in architectural structures and surfaces. This will be the first institutional show of the artist in Israel since the time Förg executed the works in 2001, when a selection of photographs from the series were shown at the Artists House in Jerusalem and the Tel Aviv Museum.